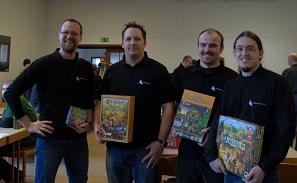 “Dr. codecentric und seine kranken Pfleger”, (codecentric, M.D. and his sick attendants) the codecentric board game team, Andreas Ebbert-Karroum, Torsten Rodemann, Marc Clemens and Fabian Lange (left to right) competed in Dinslakenhighly motivated for the qualification for the national board game championship this Saturday. After having been quite successful last year at our first attempt, our expectations were high, despite the lack of proper training.

Every player had to play one round of each of the games: Agricola , a pretty complex strategy game, Stoneage , a round based resource gathering game, Dominion , an interesting card game, in which players compile a custom card deck according to the available cards and their strategy, and Heckmeck am Bratwurmeck , a pretty simple dice-rolling game, which trains you calculating probabilities.


Despite the not very successful results, we had a fun day! And lots of motivation for the coming year. Perhaps we should then run a board game training bootcamp? 🙂

Pragmatic DSL in Practice, with Java and Drools

When I listened to Martin Fowlers Talk last week at Java User Group Cologne, I felt the urge to talk about one of my projects at codecentric. Martin said that DSLs are very useful because the business people can actually read the code programmers produce...