Ceph Object Storage as fast as it gets or Benchmarking Ceph

CenterDevice is a distributed document management and sharing software without any single centralized component. In our next evolution we are going to use the distributed object store Ceph for storing our encrypted documents. In this article, my colleague Daniel Schneller and I present benchmarks for CenterDevice’s current Ceph installation. As it turns out, Ceph is as fast as it gets. In fact, Ceph gives you a reliable, cheap, and performant alternative to commercial SANs and distributed file storage.

We use four Dell PowerEdge 510 servers with 128 GB RAM and 14×4 TB disks — two mirrored disks for the OS and 12 disks for Ceph storage. The servers are connected via 4×1 Gbit network interfaces with two redundant switches. Two network interfaces each are bonded to form a high availability link according to IEEE 802.3ad. This way, a link or switch can fail while connectivity continues over the other link. Furthermore, using layer 3+4 link aggregation via LACP, different TCP streams may use both links, enhancing network throughput.

To determine the write speed, we use dd to write arbitrary data as fast as possible. It’s important to circumvent the OS’ disk cache to get realistic results (oflag). We write a 10 GB file by reading from /dev/zero:
> dd if=/dev/zero of=/var/lib/ceph/osd/ceph-10/deleteme bs=10G count=1 oflag=direct

The results are shown in figure 1. As you can see, a single disk can write up to 154 MB/s and read up to 222 MB/s. If all disks are used at the same time, the write speed decreases to an average of 93 MB/s and the read speed to 142 MB/s respectively which are pretty good results. 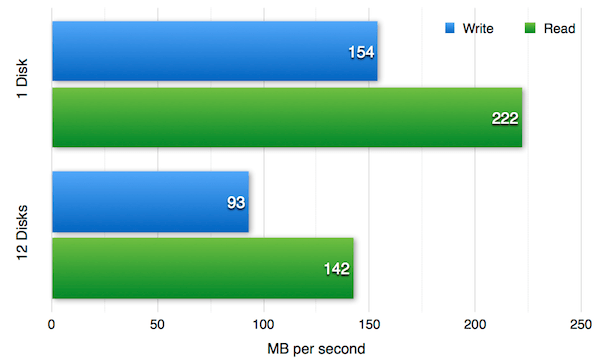 Figure 1 — Write performance for 1 and 12 disks in parallel.

Ceph suggests that there should be two separate designated networks: a cluster and a public network. Ceph uses the cluster network for internal synchronization as well as replication while the public network is handling client requests. We use four physical links, bonded together in pairs to form one link for each of the two networks. See the configuration for a bonded interface on Ubuntu below — we use a little trick to set the VLAN specific interface name to a human readable string instead of something like bond0.105. This makes the configuration less error prone.

The theoretical maximum performance for the bonded network interfaces is 2 Gbit/s = 250 MB/s. iperf  is an excellent tool to measure network throughput which we use for this measurement. We start an iperf server process on node01 and two iperf clients sending via two TCP streams each on node02 and node03:

The results are rather disappointing as we achieve only roughly 513 Mbit/s + 529 Mbit/s or about 130 MB/s. What’s wrong here?

IEEE 802.3ad uses the TCP connection 4-tuple (Src IP, Src Port, Dst IP, Dst Port) to determine the physical link of a bonded link to send data over.1 Yes, send. According to the standard, the sender decides which physical link to use. This means that our two senders (node02 and node03) select a sending link and start to transmit data as fast as possible. But the switch connecting the senders to the receiver (node01) does not know about that. All it sees are layer 2 frames designated for a specific MAC address to which it forwards the frames. So while the two senders fully utilize a 1 GBit/s link, the switch only forwards to the receiver via one single physical link which results in the observed throughput.2

If we switch the experiment’s parameters to one sender and two receivers, we get the expected results. This time, node01 sends node02 and node03 simultaneously via two separate processes. We simply use netcat to send and pv to display the throughput.

Figure 2 — Network performance for 1 and 2 streams over a bonded network interface.

This means that the maximum transmission speed is around 230 MB/s — depending on the generated load and its processes. The maximum write speed for a single disk is around 150 MB/s and for all disks used at the same time around 90 MB/s. Reading speeds are 220 MB/s and 140 MB/s respectively.

Ceph is a Reliable Autonomic Distributed Object Store (RADOS) that does not have a single point of failure as there is no central component, making it a perfect fit for CenterDevice’s architecture. In contrast to other distributed stores, Ceph uses an algorithm-only method to locate and store an object. This means that every client only needs to apply the CRUSH (Controlled, Scalable, Decentralized Placement of Replicated Data) algorithm to compute the corresponding object disk storage daemon (OSD) that is responsible for storing a particular object. Since different objects are stored by different OSDs, a client sending multiple objects talks to multiple nodes which allows it to make use of bonded links as described above.

Ceph has an integrated benchmark program which we use for measuring the object store performance. The corresponding command is rados bench. In general, this benchmark writes objects as fast as possible to a Ceph cluster and reads them back sequentially afterwards — see rados bench –help for details.3 Again, we proceed in two steps. First, we run only one load generator and second, we run 4 load generators on each Ceph node. It is important to note that all objects are replicated for data safety once in the system, leading to load on both the public as well as the cluster network.

We repeat this command in parallel on all four nodes. Figure 3 presents the results for both runs. 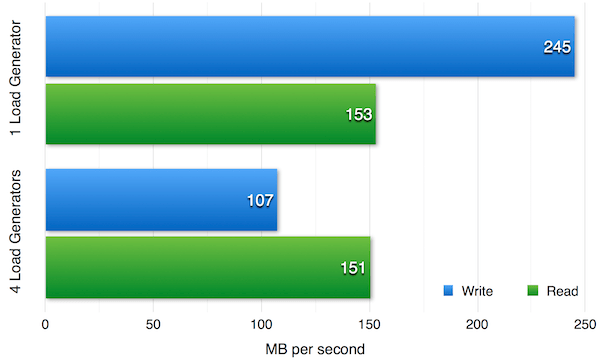 Figure 3 — Ceph read and write performance for 1 and 4 load generators.

The result for the write speed of one load generator is quite surprising. It’s almost the perfect theoretical network throughput of 245 MB/s. There are two explanation for this observation. Since all node have 128 GB RAM, there is plenty of room to buffer data before actually writing them to the disks. In this way, the network and disk IO is decoupled. In addition, the benchmark is running on all Ceph worker nodes. Since we have 4 nodes, 1/4 of the data to write is delivered locally. Consistently, write speed drops significantly when load is generated by all 4 nodes. Interestingly, the average write performance is still greater than an individual disk even though every object is replicated once which doubles the load in the cluster network. The big surprise is read speed though which remains constant and independent from the work load.

When we compare these results with our baseline, we realize that even in high load situations (4 load generators for 4 worker nodes), the write and read speed is higher than a single local disk which is quite impressive taking into account that all writes were duplicated for data safety.

Our internally run tests consist of many more scenarios than presented in this blog post. During all our tests, Ceph did its job without any quirks. The performance remains very stable even in high load situations and independently of the amount of data stored. In our opinion, Ceph is an excellent choice to store large amounts of data outperforming our former solution. Ceph gives you a reliable, cheap, and performant alternative to commercial SANs and distributed file storage.

We also have to say that the observed performance is the result of a carefully tweaked hardware and software configuration. So while Ceph is excellent choice for distributed object and file storage, the installation and configuration requires a high amount of Unix, networking, and Ceph internals knowledge.

Ceph offers way more than the described object storage. It allows you to introduce multiple redundancies — we are going to use three times redundancy in production — and snapshotting for versioning objects. On top of the object store, Ceph has a Amazon S3 and OpenStack Swift compatible REST Gateway (RADOSGW) and even a file system layer called CephFS. We benchmarked these layers, too, but omitted them here for brevity.

Feel free to contact us if you have questions and comments.

1. If frames of a single TCP stream are sent over both links, out of order reception may occur. In such a scenario, TCP would assume packet loss due to duplicate ACKs and eventually significantly reduce the sending speed. Therefore, packets of one TCP stream always travel over the same wire.↵
2. There are actually frames forwarded using the second link as the average throughput is a little bit higher than the maximum single link speed of 125 MB/s.↵
3. Even though listed in the help output, random reads are currently not implemented.↵

How to secure a GraphQL service using persisted queries