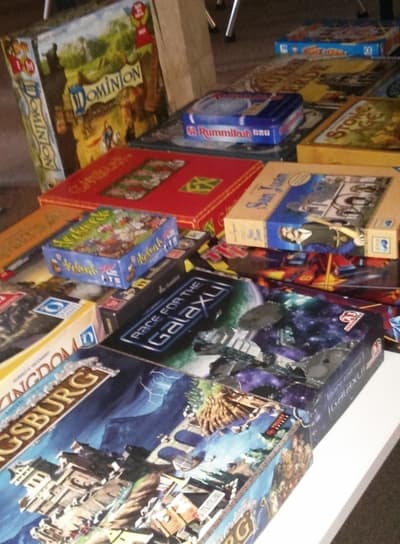 codecentric participated this year again at the international TableTopDay, where we celebrate geekdom by playing board games all day. As last year, the event was open to everybody. Over the course of the day, about 30 people played in our Solingen office. We started at 10am and had planned for 8-10 hours of gaming, but in fact the last players left shortly after midnight.
I would like to thank everybody attending for making this an awesome event and introducing others to new games. If you did not attend, but are interested in the games we played, Ill give a short summary, so that you can prepare for next year. Until then: Play more games (as @wilw says). 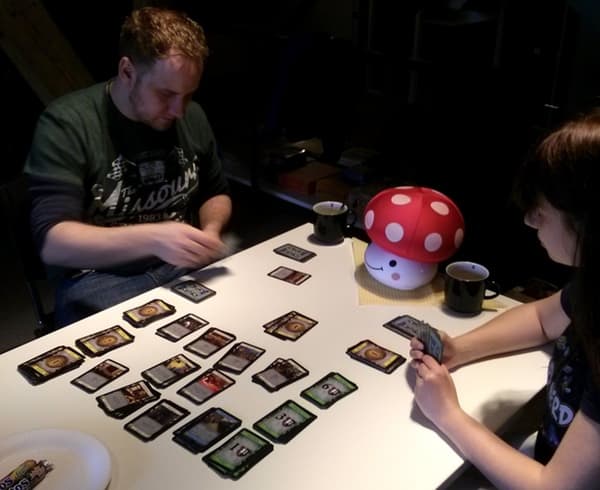 Dominion is a deck building card game by Donald X. Vaccarino. The goal is to accumulate as many point cards as possible, but because players use all their cards to play, getting points early, can actually prevent playing effectively in the later game. It is up to the player to find a good mix of money, action and point cards to stay ahead. The game has numerous expansions with plenty of alternative cards, giving it huge replayability. No game will ever be the same. 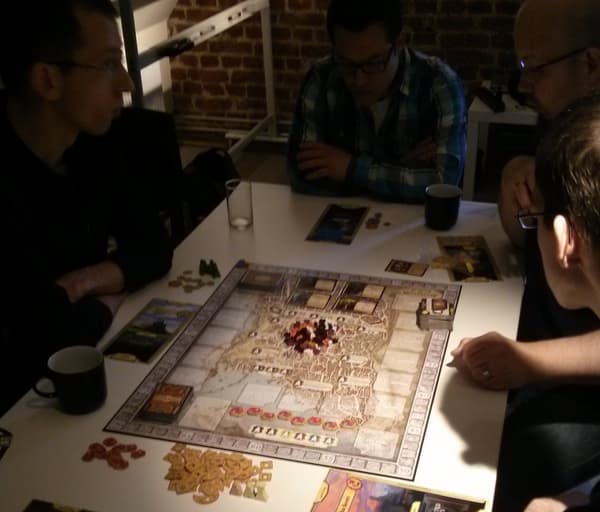 Lords of Waterdeep is a role playing strategy game by Peter Lee and Rodney Thompson. Players assume roles of the Lords of Waterdeep and play according to their own plans. A key factor is that the identity is not known until the end, leaving room for misdirection and intrigues.
Due to many rules, this game is a bit more complicated to get started with. Watching the TableTop episode with host Wil Wheaton and guests Felicia Day, Pat Rothfuss and Brandon Laatsch can help to get you started. 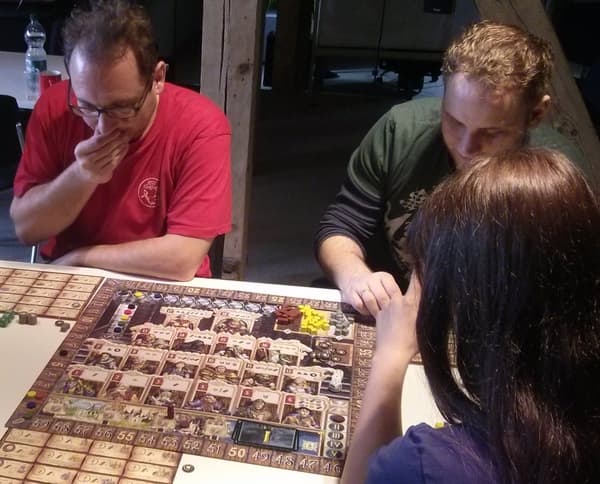 Kingsburg is a dice rolling game by Andrea Chiarvesio and Luca Iennaco. It involved more strategy than you would expect, but it is also possible to get screwed by dice. With the dice roll results players obtain various resources. Once a player takes it with a roll, it is blocked for others until the end of the turn. This adds quite a competitive aspect to the game. Resources then can be spent on buildings which give access to special abilities. Due to the high amount of luck and blocking strategies, I would only recommend to play with people you like 🙂 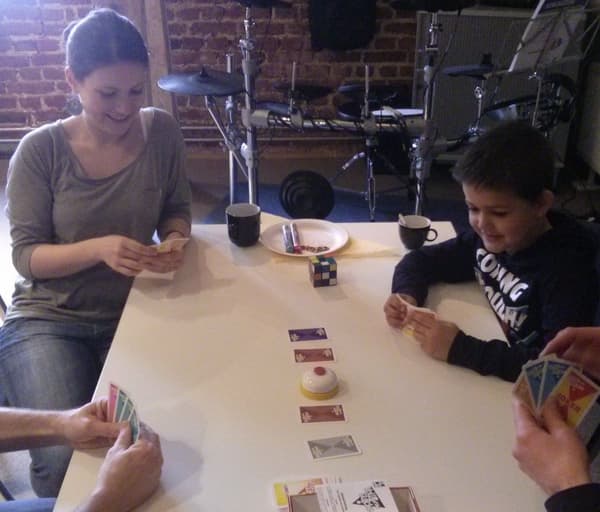 Voll auf die Glocke is a simple card trading game where players are teamed up and trade cards around. When a player completes a set, she has to sign her teammate to ring the bell (German: “Glocke”). But if the other team notices the sign, they can hit the bell on their own even with not having the set completed. 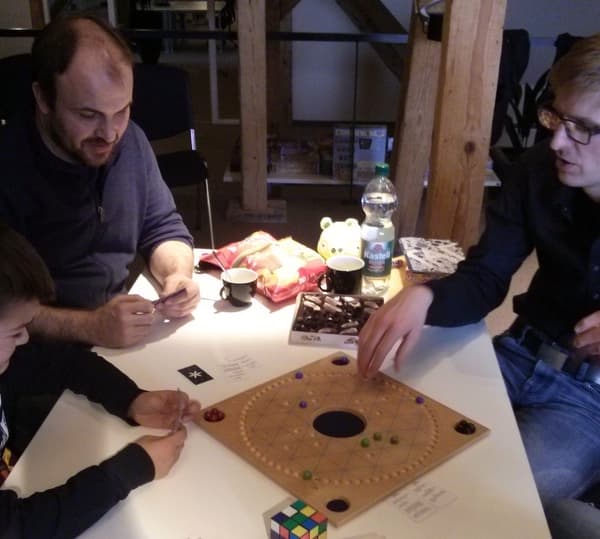 Tac is an Parcheesi like board and card game by Kolja Sparrer, where players have to get their balls across the board by using cards instead of dice, reducing the luck aspect of similar games which use dice for that. 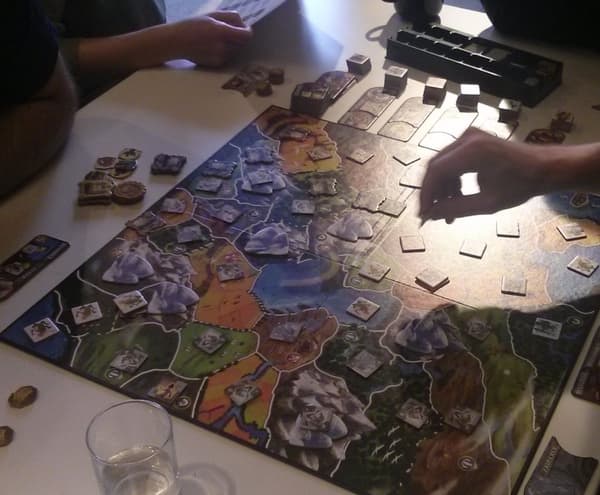 Small World is an area control game by Philippe Keyaerts. it has a lot of similarities to Risk, but with the twist, that players control fantasy races like halflings or merfolk. Every race has special abilities which can be modified by additional attributes. How about flying orcs? The second twist is that players should play a race only for a limited time and then switch to a different one.
The game is easy to learn and the interesting race and ability combinations give some amount of replayability.
Trivia: The TableTop Episode featuring Host Wil Wheaton and guests Jenna Busch, Grant Imahara and Sean “Day9” Plott was the first episode aired and the first to reach over one million views. 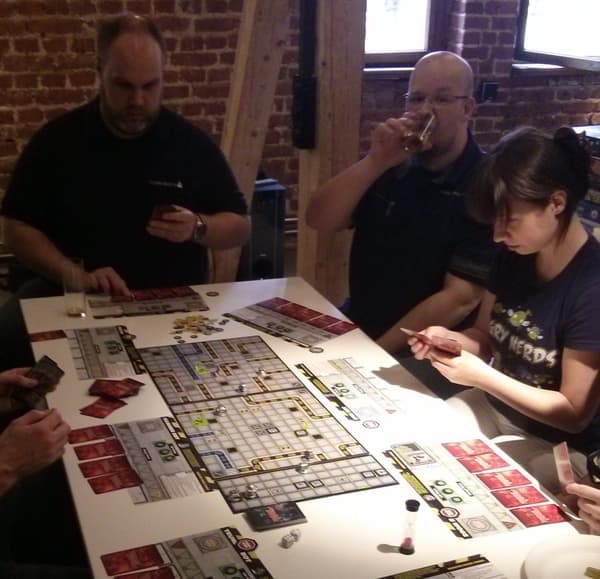 Robo rally is a sequence planning game by Richard Garfield. Every player controls a robot and needs to get that robot to pass multiple checkpoints across the map. The map is filled with obstacles like conveyer belts and lazers. To make the robot run, players need to program it with random movement cards they get. After all robots are programmed the program is executed and robots and the board moves. Due to unexpected player interaction, things can get hilarious quickly. Many robots have ben crushed, fallen of the board or lasered into pieces in our play. 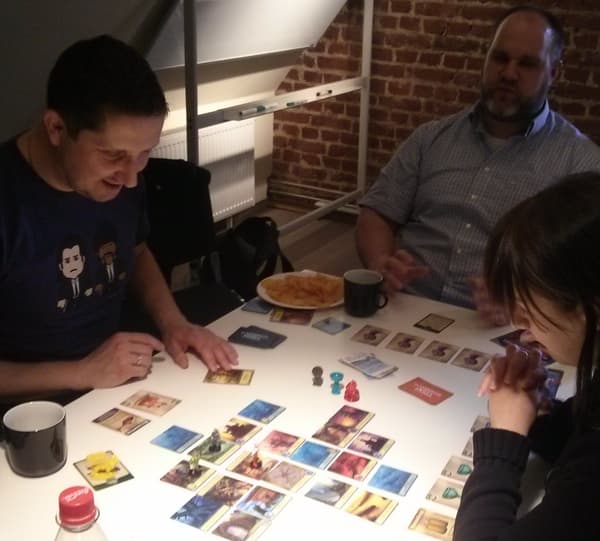 Forbidden Island is an objective focused cooperative game by Matt Leacock, where players have to gather treasures from an island which is sinking. It has multiple scenarios, and different player character abilities, which are required to get all objectives before they are lost to the water. 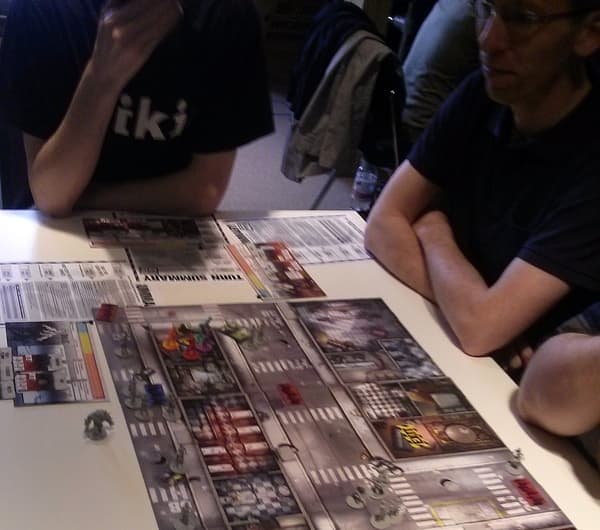 Zombicide is a cooperative survival game by Raphaël Guiton, Jean-Baptiste Lullien and Nicolas Raoult. Players play together using their different survivor abilities to complete scenarios. Depending on the scenario things escalate quickly and zombies fill the board. The game gets increasingly difficult every single turn, which requires the players to discuss optimal movements a lot. The game is a huge time sink. We completed our scenario after 6 hours, and it was very close. 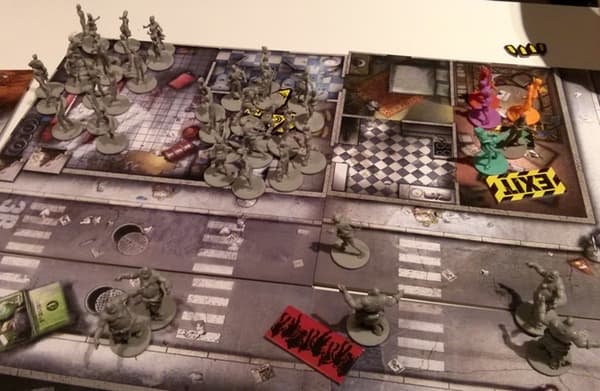 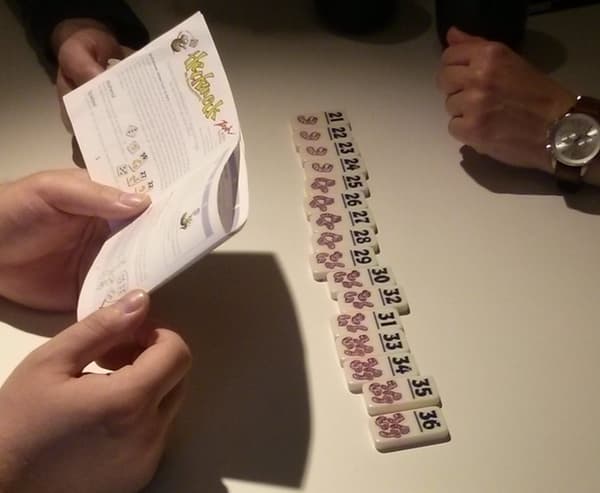 Heckmeck am Bratwurmeck is a dice rolling game by Reiner Knizia. It requires the player to re-roll her dices to possibly get more points, which adds a strategic element to an otherwise heavy luck based game. 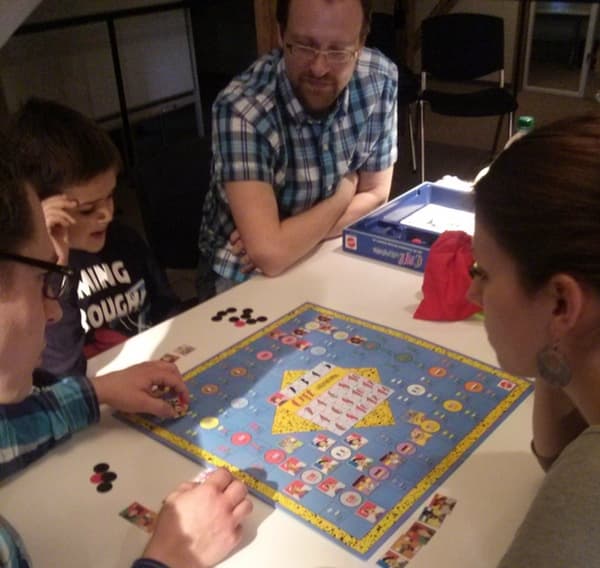 Cafe International is a tile laying game by Rudi Hoffmann, where players have to balance the tables in a restaurant. Seating guests has to follow some rules and has differs in scoring. 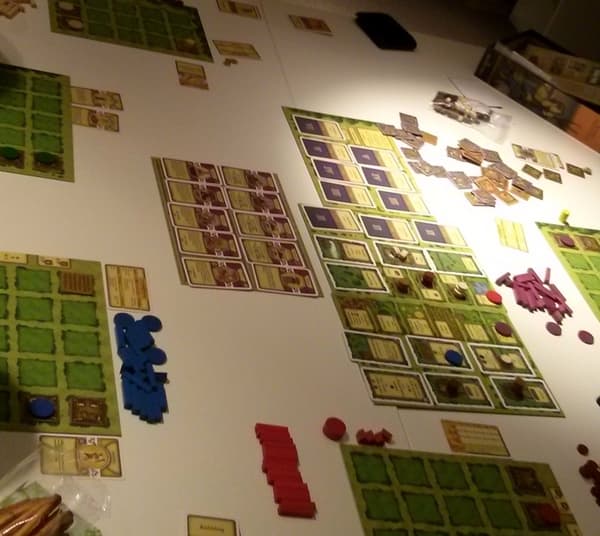 Agricola is a farming themed resource management strategy game by Uwe Rosenberg. Players build their farms by gathering resources. Players need to balance the needs of farmers and animals to provide housing and food, as well as to improve the farm. It is a fairly complex game, because it involves complicated action chains: Fo example, to provide bread to farmers, players have to plow, sow, wait for wheat to grow, reap and bake. All requiring multiple turns to complete.

Mirkos son Luca discovered a rubiks cube we had as decoration. He was busy for a while trying to solve it. After a while he came back with it to his dad, asking him to solve it. The picture shows Mirko trying to use a tutorial on youtube to achieve that. 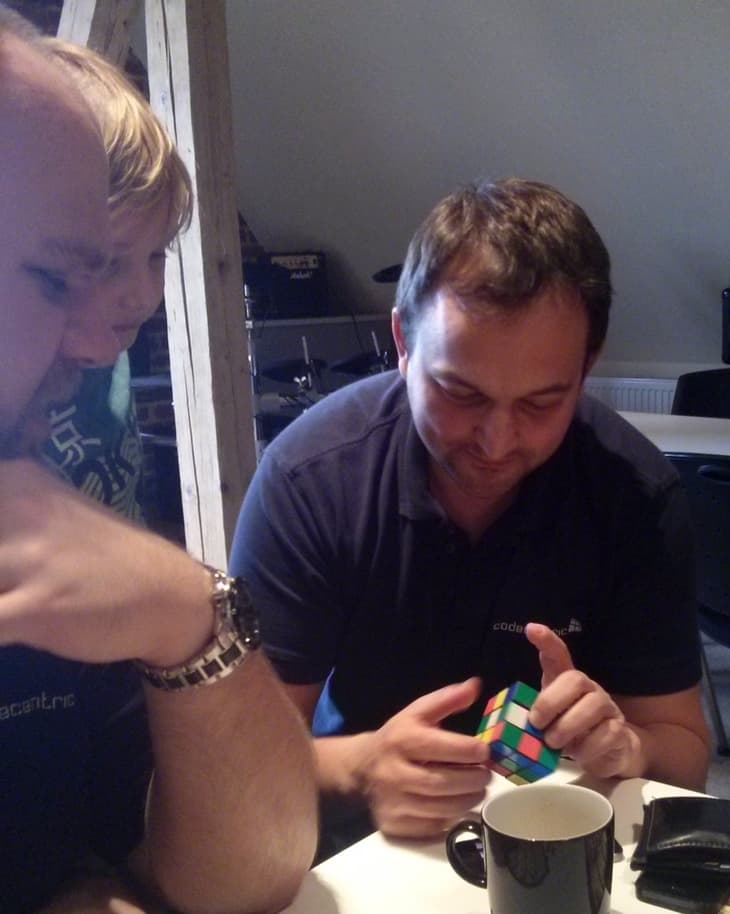