Before we start looking for solutions, we need to clarify what we are actually talking about as the term transaction is quite overloaded. In our scenario, there is a stream of documents to be indexed, some of which form logical groups. The transactional requirement is that, for each document group, no document of that group becomes searchable before any other document of the same group. Put differently, all documents in a group become visible for search at exactly the same point in time. Thus, we are talking about atomicity with respect to visibility for search, and I’m going to refer to that as a transaction. So how to achieve transactions with Elasticsearch?

Let’s take a look at how Elasticsearch handles indexing operations so that we know what we can build on. Elasticsearch internally uses Lucene, so let’s check how the two work together.

With Lucene, documents to be indexed are first kept in an in-memory buffer where they are neither searchable nor persisted. A Lucene flush() operation, which is executed based on certain heuristics, turns the in-memory buffer into a segment. A Lucene commit() goes one step further, as apart from forcing a flush() it persists any in-memory segments on disk and makes them searchable. Because a commit() is rather heavyweight in terms of I/O, Lucene has a feature called near-real-time search (NRT) which is able to make in-memory segments searchable even before commit() is called. 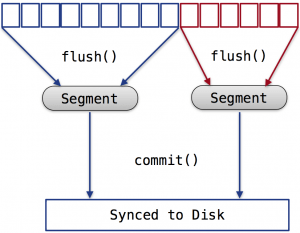 Illustration of the Lucene flush() and commit() operations.

Thus, with Lucene, a segment is the atomic unit with respect to search visibility, but only a commit() guarantees durability. If you are curious why Lucene uses segments in the first place and how this approach benefits search performance, I highly recommend reading Lucene in Action, Second Edition, Manning 2010.

When Elasticsearch receives an indexing request via the REST API, it needs to persist the document so that it can send the client an acknowledgement of safe reception. As it would be way too costly to execute a Lucene commit() for each received document, Elasticsearch uses its own persistence mechanism called the transaction log. The transaction log supports two major operations which eventually map to the Lucene operations introduced above. The first operation, the Elasticsearch refresh(), turns transaction log contents into a segment and makes them available for search via NRT, which involves a Lucene flush(). The second operation, the Elasticsearch flush(), executes a Lucene commit() and then clears the transaction log as all its documents have now been persisted by Lucene. By default, the refresh() operation is scheduled every second and the flush() operation is executed depending on certain heuristics. 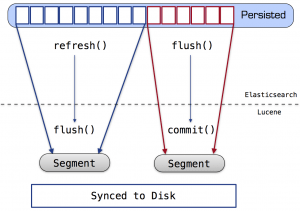 Illustration of the Elasticsearch transaction log, the refresh() and flush() operations and how they call Lucene operations.

At our customer, none of these assumptions was satisfied, so changing refresh behavior was not an option. Apart from that, the approach is undesirable for performance reasons because issuing refresh with high frequency will create lots of small segments (which makes search more costly and requires many future segment merges).

If changing refresh behavior does not help, we need to represent transactions explicitly in our data model. How about this simple idea: We extend our document mapping by a boolean field, say “completed”, initially set to false for newly indexed documents. We extend all search queries by a filter for documents where “completed” is true. Only when all documents of a group have been indexed, we update “completed” to true for all of them.

While this approach may sound promising at first, it has several drawbacks: First, it is not reliable because of refresh behavior. Updating “completed” for all documents of a group is not an atomic operation, so if refresh happens in the middle of that operation only part of the documents will be visible for search. Second, it is not particularly cheap because all documents are effectively indexed twice. Third, how do we actually want to implement the update for setting “completed” to true? Right now we would have to query for all documents of the group first and then update all of them by ID (yet it has to be said that some support for multi-document update capabilities is apparently planned for some future Elasticsearch version).

Let’s look for a better way to tie the documents of a group together. A primer on data modeling in Elasticsearch is this chapter of The Definitive Guide (highly recommended reading), according to which we have three options: Inner objects, nested objects, and parent-child relationships. A solution based on inner or nested objects would require storing the contents of several documents in a single document, which means we would lose the ability to query and retrieve them individually (in case of nested objects) or the sub-documents would lose their identity altogether (in case of inner objects). Parent-child relationships are the only way to establish relations between multiple documents and leave them intact otherwise.

The parent-child mechanism offered by Elasticsearch supports the modeling of one-to-many relationships. A document type may refer to a parent type in its mapping, and each document becomes a child of the parent document it is referring to. Every time a child document is indexed, it needs to specify the ID of its parent document.

We will use these parent-child relationships to implement transactions. In order to avoid cluttering this article with lots of code, I will only outline and discuss the solution here. In this Gist you will find a complete, commented scenario where the solution is demonstrated using the Sense tool that ships as part of Elasticsearch Marvel (and thus is free for development use). If you haven’t used Sense yet, give it a try and you will never want to use curl again for talking to Elasticsearch.

We define the following mapping for a type called “document”, representing the documents of the stream that we actually want to index:

By including a check for the existence of the parent document into queries for child documents, we can ensure that search only ever returns documents of completed groups. For example, the following query searches for all documents where the “data” field matches “part1”, but thanks to the additional parent filter only those with existing parents, i.e., completed transactions, will be returned:

It’s as simple as that! The benefits of this solution are:

Naturally, the approach also has some limitations. If there are multiple clients working in parallel and documents of the same group can be handled by different clients, it is possible that one client indexes the last document of a group already while other documents of the same group are still queued at other clients. Also, the solution cannot work if there is no way to identify the last document of a group.

Both issues may be addressed by a modification of the approach which becomes possible if the number of documents in a group is known beforehand. Then we can store a counter in the parent document, and each document indexed increments the counter by one. If we modify the search request accordingly, we can achieve that documents only become visible for search when the counter has reached the expected number of documents of their group. I also created a showcase for this modification which you can find here.

Finally, we need to be aware that the use of parent-child relationships may involve non-negligible overhead regarding search time and memory. If queries turn out to be too slow, or if memory issues arise, it may make sense to look for alternative solutions based on the nested objects approach after all, even if that would involve combining all documents of a group into a single one. 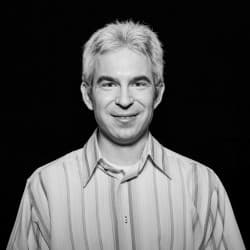