In the previous post, we were explaining the struggle of choosing the proper cloud solution that provides the physical mobile devices to run the tests on. If you’ve skipped it, don’t worry. It’s here:

Fast forward to the next decision to make: what tools to use?

On Android there aren’t many choices when it comes to which library to use. Obvious choices are Espresso and UIAutomator. Although the libraries can be used for the same goal, there are crucial differences between them. Shortly:

For the purpose of end-to-end testing, we needed both libraries in order to pull out the best of both worlds and to implement proper automated testing of the app.

When the UI testing is implemented, the library syntax is never simple nor pretty. Having two libraries working together, with completely different syntax, makes readability and maintainability quite hard to achieve.

For example, let’s see how could we execute a click action on the UI component.

In case of Espresso, we’re working with three types of objects. Matchers, ViewActions and ViewAssertions. Following the syntax and combining these three objects, we would implement click action like this:

In case of UIAutomator, it’s much more complicated. There are a couple of preconditions to make in order to query the UI hierarchy for the specific object.

We’ve recognised this problem right in the beginning and decided to use the power of Kotlin to write a DSL which unifies the syntax for both libraries. An additional benefit we get is an easier handover of the codebase to the new colleague, as the DSL syntax is more logical and simpler to grasp.

Just by looking into the existing examples, writing the new tests shouldn’t be a hurdle at all. We proved this by introducing the new colleague into the team, inexperienced in Kotlin, and he started writing production ready tests in a matter of week. Yay!
Extending the DSL proved to be a simple as well.
The syntax we come up with should be human readable as much as possible and hopefully we succeeded. It’s identical for both, Espresso and UIAutomator. It just depends of what function you imported on first use in the class.

During development, we’ve had to use more and more actions and assertions on the UI components, so the DSL grew over time. At one point it became problematic to maintain that collection of functions as well, so we had to organise it and make it independent of the current application we were testing. The library is born.

Android Test KTX is a resulting library which is deployed to the GitHub and open sourced under Apache 2.0 license for the public use.

As everything goes in pairs now, so does the library organisation:

Functions are split into two main packages called espresso and uiautomator. Further, each package has an Actions.kt, Assertions.kt Matchers.kt and {library}Extensions.kt.

are both written in the infix notation, where the on and into are infix extension functions.

These expressions could be written like this as well:

We’ve left it to be a personal choice of the library user.

on and into functions have an identical implementation, and we created onto function as well. Their purpose is to increase the readability and semantical meaning of the expression.
We want to click on something, type into some field or hold onto something else.

view, text, field and button are also the functions with the identical implementation, doing the same thing as viewById it should improve the semantical meaning of the expression.

This DSL proved to be a working solution, which simplifies and accelerates the testing process. Personal satisfaction shouldn’t be excluded either, as writing the concise and readable code make you feel better. Me at least. Time spent on debugging and understanding the test is brought down to minimum. What’s more important, if you’re using this library, knowing full UIAutomator or Espresso logic isn’t necessary any more, or at least it shouldn’t be mandatory. This shouldn’t be taken for granted though, as set of these functions should be extended at some point, but for the basic to medium interaction with the UI components, it’s definitely something to think of.

Finding the UI component and making an interaction with it brings us a half way to the goal. With the verification of the UI component state, we’re completing the test. We’ve introduced the verifyThat infix extension function to cover the readability of the Assertion part.

This function influenced the naming of the assertion functions greatly, as we constantly have a semantical meaning of the expression in mind.

This library is deployed onto the JCenter and can be added into the project by adding the line below into the build.gradle file 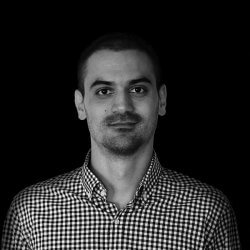