IoT is broadening its place in the industry. We can see many industry level devices available on the market. New technologies, such as AI, computer vision, 5G, VR/AR, microcontrollers, sensors, robotics and more, are pushing IoT forward and growing its market.

In this blog post, I want to share with you a new retrofitting solution whose purpose is to further push the IoT world into the industry.

Retrofitting is our IoT keyword for the industry. It is the idea of upgrading machines to enable communication with a system, extract useful data and do data science. An idea to enhance machines with new technology to improve a process.

IoT in the textile industry

Our idea was first introduced to the textile industry. Sewing machines are the perfect playground to evaluate the idea, especially those which have been in use for more than a decade, and even up to the last 40 years. By retrofitting those machines we can get more data out of the production process and use them to make better decisions. Following we have a chart with hourly data representing Stitching Cycles, Thread Cuts and Sewing Head Lifts during 4 hours of work.

For those who are not familiar with this terminology, those are commands which can be sent to the machine with the sewing pedal. The chart represents the aggregate count of each. The commands are:

From this chart, we can get some useful data. We can recognize a pattern and see a correlation between these three commands. The pattern did not happen by accident. The worker was sewing one exact pattern, doing one repetitive job, for four hours. The pattern he sewed was a zigzag line:

We can compare this to a real-case scenario where the worker was sewing for e.g. a shirt sleeve and doing repetitive work during the day. The first hour he was preparing, and the others he was sewing at full speed.

Anomalies in the pattern could mean that the machine is broken or that the worker needs more training for this specific product. Every product could establish its own patterns which could be used to send alarms and keep track of the production.

This is just one chart from our system to show the potential of retrofitting sewing machines. There are more charts and data which combined create more powerful information, but they will not be covered in this blog.

Retrofitting machines for the future of the IoT

One use case which has proven to be useful is retrofitting sewing machines. This gives us the courage to expand the idea to other industry branches. Retrofitting machines has lots of potential because it gives us the ability to extract data from all of our machines, gives us a better insight into the production process, allows pattern recognition to come as near as possible to an ideal production, sends alarms in case of detected anomalies in the production, shows charts and dashboards for production performance and utilization analysis, tracks machines’ health, and more. With those, we are able to ensure a better production line optimization on the shopfloor as well as better planning and maintaining the production to save time and money. 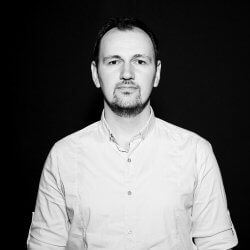 Emir is a software developer at codecentric Doboj since January 2019. He is working with Web Technologies and Resource Optimization Algorithms.