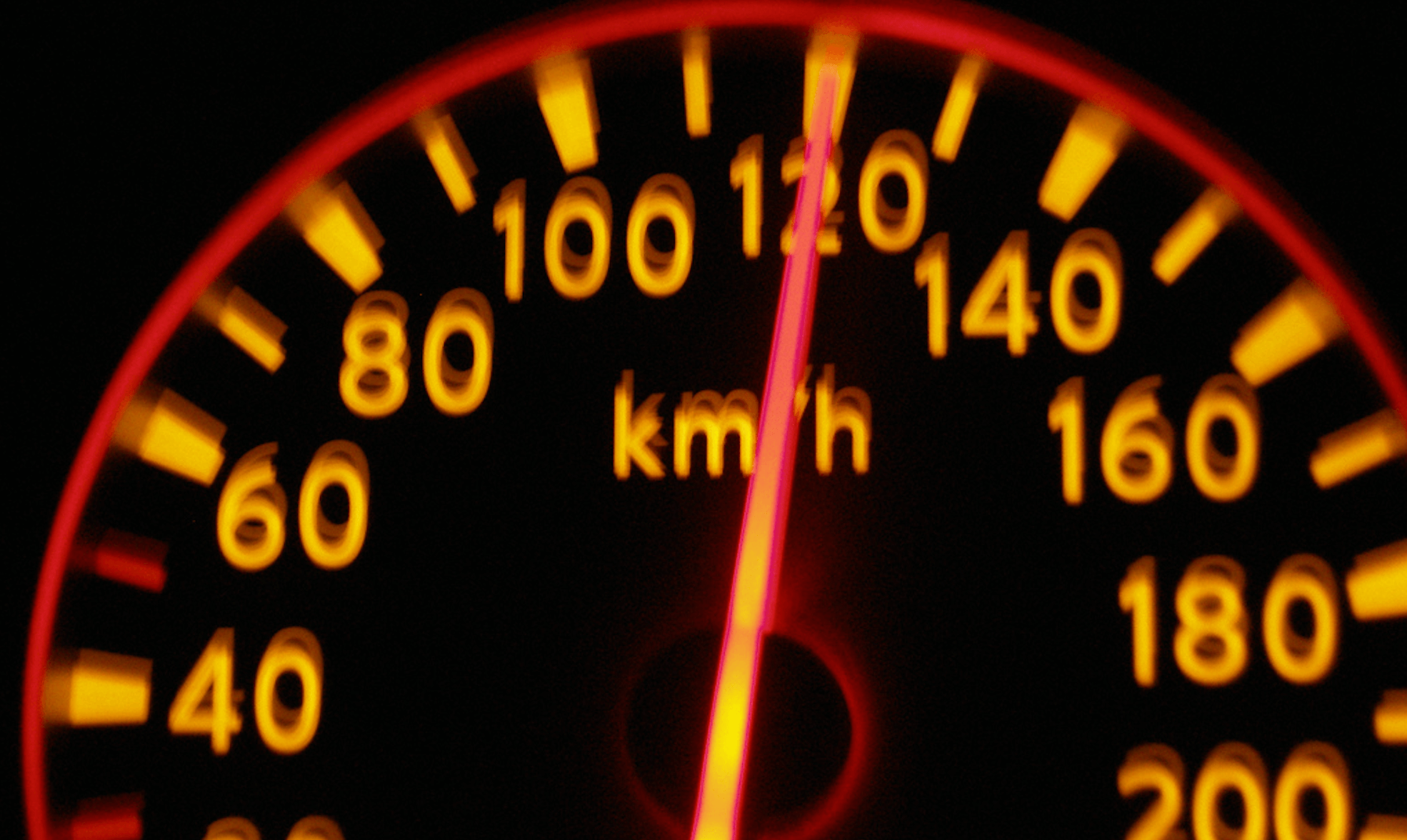 I am sure you recognize this loading spinner icon. I do not know anyone who likes to wait for the computer. However, when writing software I usually favour readability, maintainability, and extensibility over speed. I agree with Donald Knuth that premature optimization usually causes more problems than it solves.

Nevertheless at some point you are going to write code where performance matters, or at least bad performance hurts. In this situation it might be useful to look at the performance characteristics of your code. I personally like to combine two approaches:

In this blog post I want to focus on runtime benchmarks only, specifically microbenchmarking. The next section is going to set a few theoretical foundations. Afterwards we are going to look at ScalaMeter, a tool for automated performance testing in Scala. The last section contains a few examples, comparing the runtime performance of different implementations. We finish the blog post by summarizing the main points. The examples will be written in Scala and related to the Scala programming language but should be understandable for anyone with a bit of functional programming knowledge.

If you want to learn more about how to analyze the complexity of your algorithms, I can recommend the amazing book “Introduction to Algorithms” [1].

In computing, a benchmark is the act of running a computer program, a set of programs, or other operations, in order to assess the relative performance of an object, normally by running a number of standard tests and trials against it. [2]

Similar to unit tests, having automated microbenchmarks cannot give you any guarantees. The results heavily depend on the selected input and interaction effects between different components of your architecture are not taken into consideration. Nevertheless they are a useful tool to compare the relative performance of different implementations. They can also be used for regression testing.

“ScalaMeter is a microbenchmarking and performance regression testing framework for the JVM platform that allows expressing performance tests in a way which is both simple and concise.” [3]

ScalaMeter provides a highly configurable testing framework with default configuration for different standard use cases from quick console reporting all the way to sophisticated regression testing with HTML reporting. I find the following features especially useful:

In the next section we are going to look at some experiments where I used ScalaMeter to perform the measurements.

In this section we are going to look at three experiments:

All experiments are performed using ScalaMeter 0.9 and Scala 2.12.4. My computer has a 2016 3,3 GHz Intel Core i7 with 16 GB of RAM. I am using the Bench.OfflineReport, which executes the code in a separate JVM and applies an appropriate number of warm-up runs.

When working with collections in Scala, the map operation is quite common. xs.map(f) applies the function f to every element x in xs and returns the result. If you have two composable functions f and g and you want to apply both, you express that either as

In terms of the result, both operations are equivalent. The memory footprint and runtime however might differ, depending on the implementation of xs and map. If you are using a strictly evaluated collection, on every map call the result will be computed. If the collection is immutable, a new collection will be created with the resulting values.

In this experiment we want to look at the relative runtime performance of both expressions comparing a List (strict) and a SeqView (lazy).

Given both the strictList and the lazyList as l, we perform the following two experiments for both of them. Note that we omit the force command here for the sake of simplicity. In the experiment it is needed to actually trigger the computation of the view. 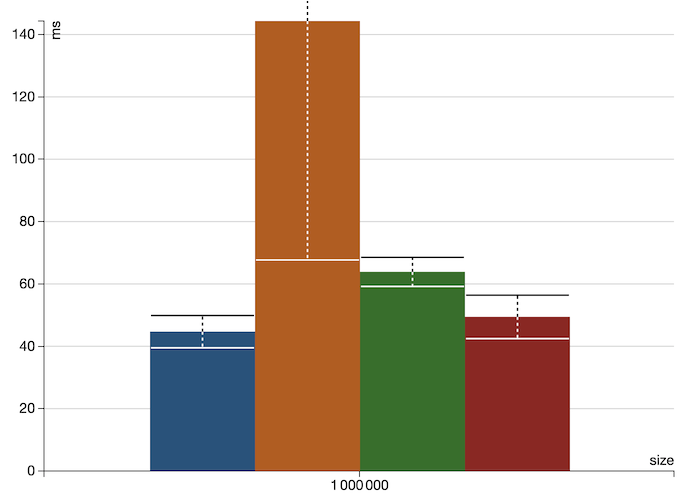 Looking at these results I find three notable observations:

Sorting a collection is required in many applications. May it be showing a list of events ordered by their time of occurrence, or preparing a table for being joined with another one using a merge-join algorithm. 20 years ago, developers had to be able to write efficient sorting algorithms themselves, as standard libraries were not as rich and computers not as fast.

Nowadays you will find fast-enough implementations of sorting algorithms in almost any standard library. If you are not dealing with strict performance requirements, this is also fine, as using available standard functions can make the code less buggy and more readable.

Scala offers a method to sort immutable collections called sorted, which is available for all standard sequence-like collections. In this experiment we want to compare the relative performance of sorted on different Scala data structures, and also compare it to the performance of the java.util.Arrays.sort method.

Given the list, array, and vector as l, filled with random integers, we sort them using the Scala sorted method. For the array, we also apply the Java sort, which works in-place. In order to make the results comparable to Scala, which gives you a new collection back instead of modifying the existing one, we also copy the array first in another experiment. 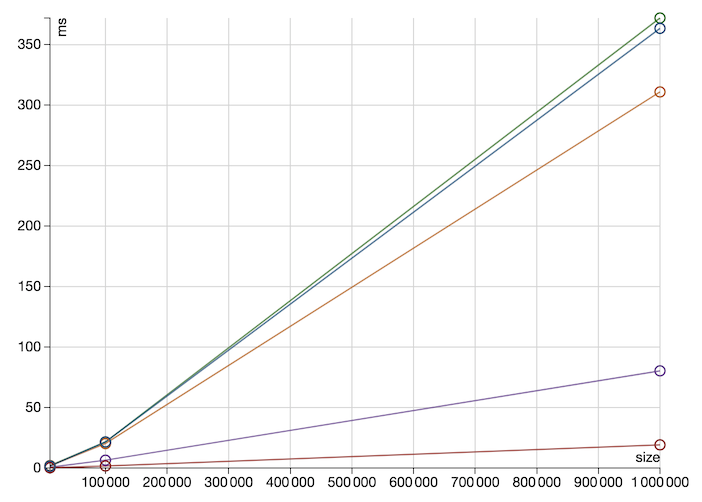 Looking at the performance for different collection sizes there are no surprises (log scale would’ve been better I know…). When looking at the difference between the Scala and Java array sort, I was kind of surprised. 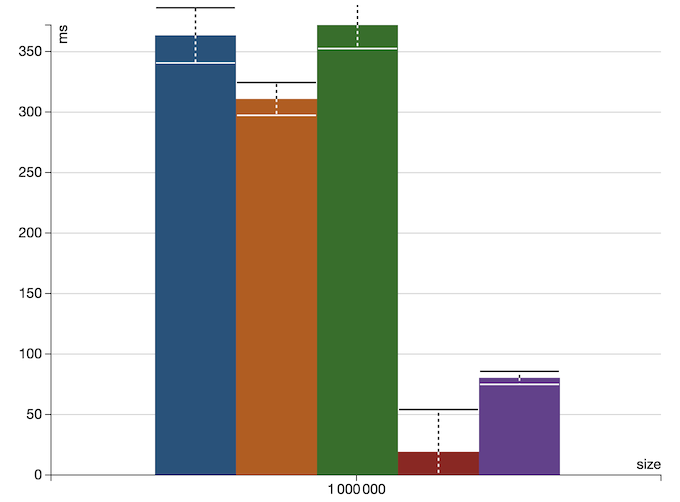 The Scala sorts are so much slower. Looking at implementation of sorted we can spot two details which might explain the difference in runtime.

You can see that it also uses Arrays.sort internally. But why is it so much slower? I think the reason for that is that it does not only copy the data to a new array but also has to copy it back to a collection of the original type. When sorting an immutable list you expect to get another immutable list back. This is done using a respective builder b (e.g. a ListBuilder):

But also the creation of the initial array could be a reason for it being slower. For making the copy, I was using Arrays.copy, which uses the native method java.lang.System.arraycopy under the hood. In the Scala method, the array is created in a loop:

Looking at those results, I think it is obvious that when it comes to sorting, you should always check the performance of your implementation if it matters to you. Using a sort algorithm that immediately outputs a new immutable collection instead of relying on an intermediate array would be the better choice. Nevertheless most of the time the benefits you gain from using standard methods outweigh the performance gain of custom solutions.

One of the most common beginner mistakes when working with Java is building up strings using concatenation. In Java, strings are immutable. As they are so commonly used, the JVM maintains a string pool (see flyweight pattern).

This has an implication when concatenating strings. The following code will create three string objects:

While this is not a problem in most cases, it can become one when used inside loops. When building up immutable data structures you should thus always rely on the respective builders, which are mutable, and then create the final, immutable structure when you are done. This is fine as long as the builder cannot be accessed outside the local scope.

In this experiment we are going to compare the performance of building up immutable data structures step by step using concatenation on the immutable object vs. using a builder to construct the final structure.

Given the range of numbers and strings as xs, we compare the performance of constructing a new string, set, and list out of them step by step. First we use plain concatenation (+, and ::), then we use the appropriate builder.

All three data structures are immutable. But what is the performance implication of using concatenation? Let’s look at strings first. 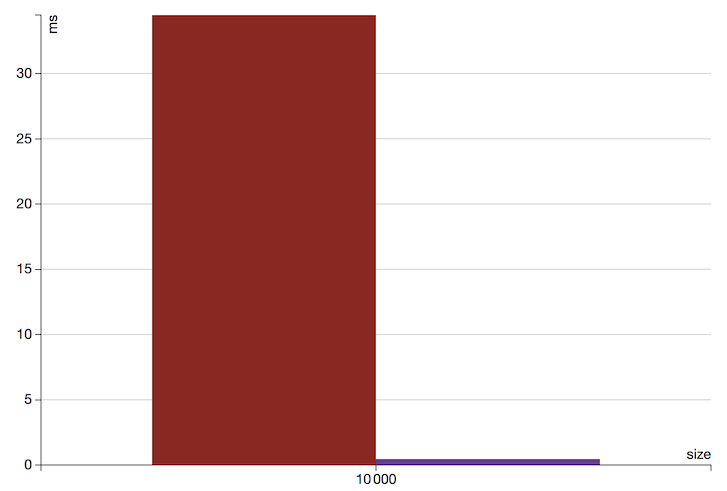 The graph shows that the overhead of creating additional string objects for each iteration is immense. How does it behave for sets? 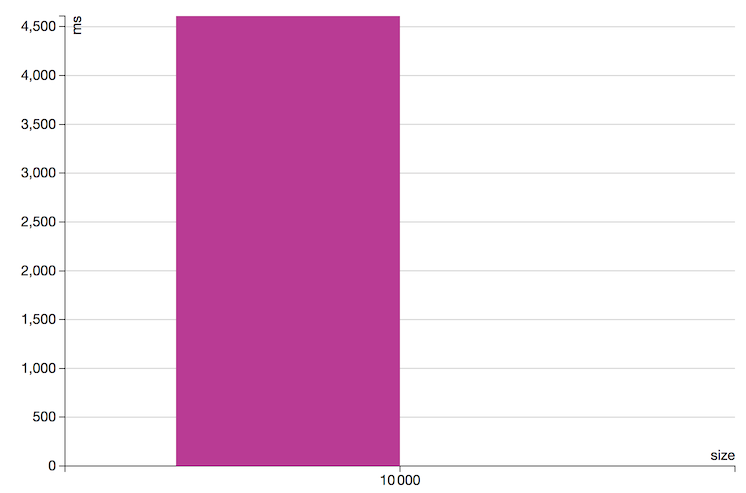 For sets it is actually even worse. This is probably because it has to initialize the whole set again for every iteration. Building up a hash set is no trivial operation which makes the performance impact even higher than for strings. Does the same hold for lists? 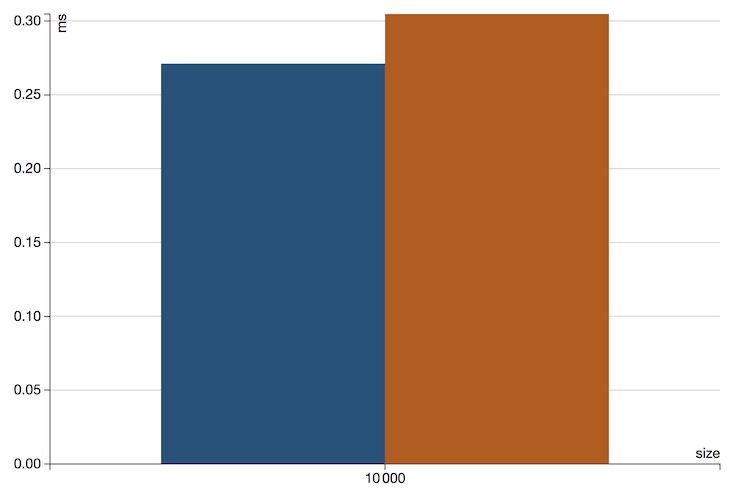 With list the picture is different. The reason is that it requires only constant time to append an item to the front of the list. If we concatenated to the end, the run time might be longer, depending on whether the implementation stores a pointer to the end of the list as well.

If you don’t know what collection implementation you are using, you can safely rely on the newBuilder function just to make sure.

In this blog post we looked at ScalaMeter, a tool for automated microbenchmarking and regression testing in Scala. We’ve seen three examples of how small details in the code can significantly change your runtime performance.

While it is better to stick to standard methods and libraries for the sake of maintainability und readability, it might require custom solutions if performance matters to you. Anyway, by measuring the performance in an automated way you can gain more confidence about your code and also catch performance regressions automatically.

Hit me baby one more time – What are cache hits and why should you care?