Today, the security scanning of code, containers and applications is at least as important as the functionality of the application itself. It’s vital to detect software vulnerabilities like data leaks, secret publications (etc.) as early as possible during the software development lifecycle. Otherwise potential attackers will have an easy time exploiting your weak spots.

But what does that mean in the context of ever faster development processes, integrated CI/CD cycles and container orchestration software like Kubernetes?

Get a full list of security scans provided by GitLab at Secure your application. For these different security scanning technologies GitLab supports a wide range of programming languages like Golang, Java, C/C++, python and many more to detect different kinds of vulnerabilities.

However the activation of security scans is very easy. Simply add the appropriate security scan template to your already existing gitlab-ci.yml file. Alternatively, if there has been no pipeline so far, create a new one inside your GitLab project. GitLab now is going to run these configured security scans during the next git push on that branch. The results appear on the security tab of the pipeline’s overview page.

Now we want to have a look at different types of security scanning methods:
1) Static Application Security Testing, 2) Secret Detection and 3) Dependency Checks. Furthermore, we will briefly look at how security issues can be managed in GitLab.

If you are interested in container or licence scanning or even dynamic scanning of applications, take a closer look at the second part of the article series GitLab security scanning – part 2.

SAST checks source code statically for known vulnerabilities and can be used at all tiers. To get a first idea of GitLab’s security scanning tools let us look at a very simple but vulnerable python script snippet:


All of these subprocess commands are vulnerable to user input because input values are passed to Python’s module function subprocess.call() directly without any sanitizing. This way, a potential attacker could access critical data.
Now enable SAST for that GitLab project by creating the following .gitlab-ci.yml file inside the project’s root directory: 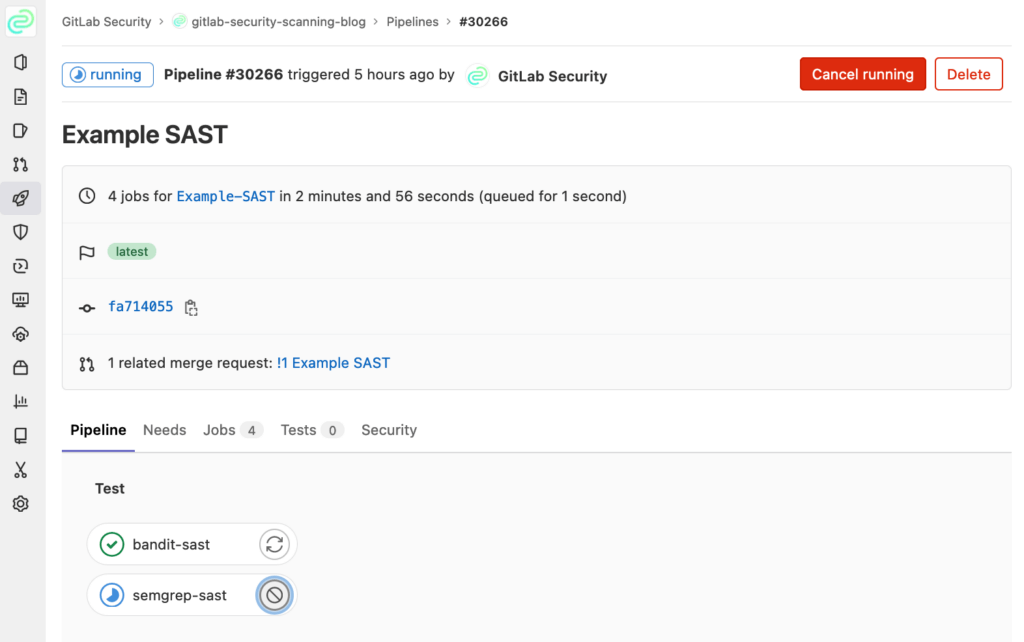 After the pipeline has been successfully completed, all findings can be viewed and evaluated on the security tab of the pipeline page. Vulnerabilities can either be dismissed or followed up and finally mitigated with the help of GitLab issues: 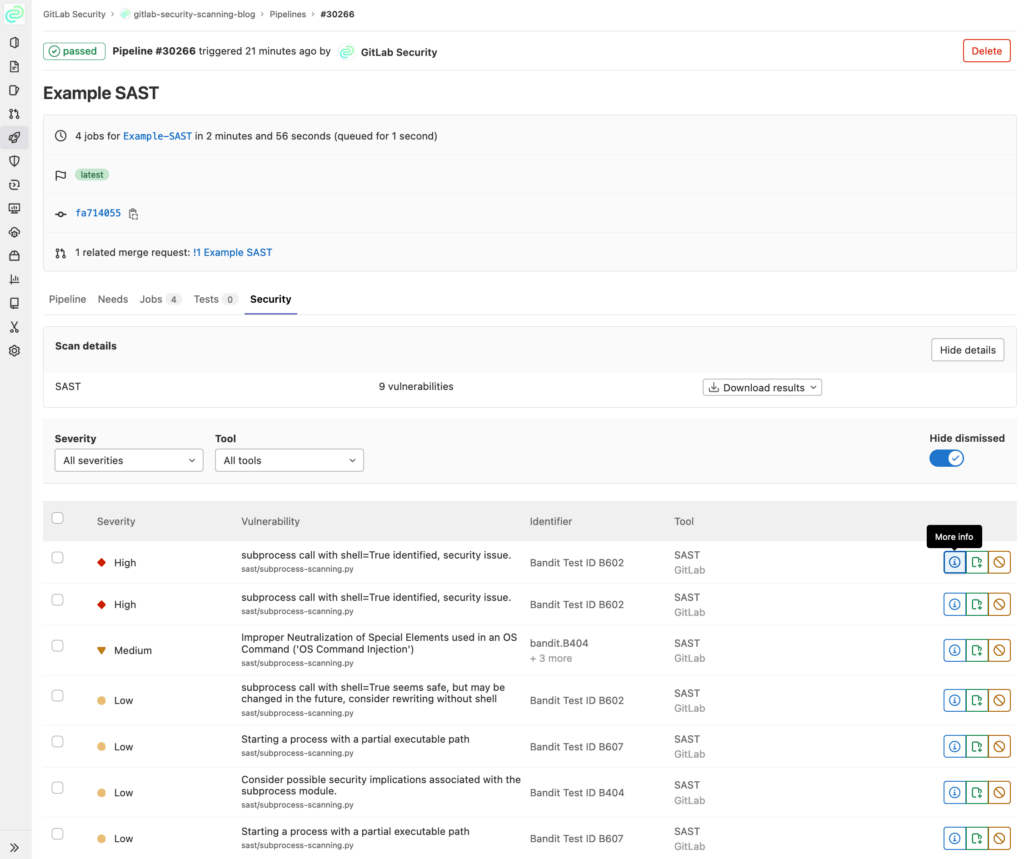 All vulnerabilities are listed at the merge request as well: 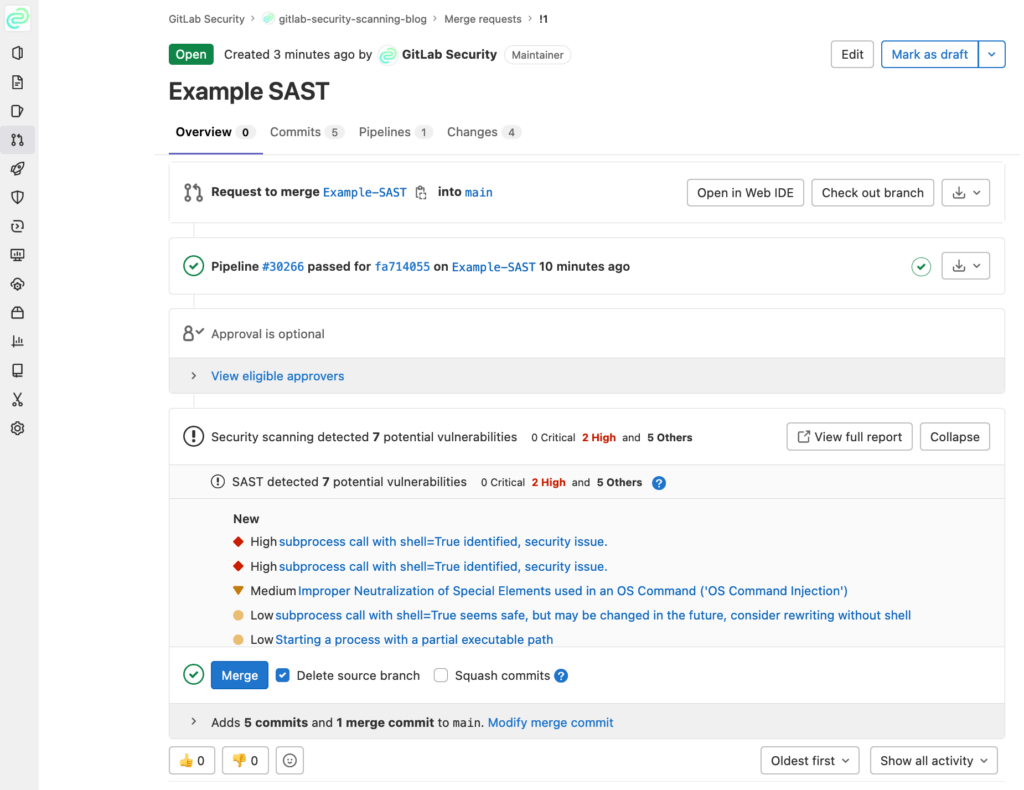 Secret Detection highlights accidentally pushed secrets like passwords, API keys or tokens in the GitLab repositories. For this purpose GitLab uses Gitleaks for detection. For instance, if you have pushed AWS secrets to your development branch by mistake GitLab will notify you. In this manner you can mitigate that leaked secret early to prevent further distribution.

Furthermore, to simulate accidentally pushed secrets we add some secrets for accessing different systems like AWS, GitLab or linux servers via ssh key:

Looking at the security dashboard of the corresponding pipeline there are now vulnerabilities concerning pushed secrets. 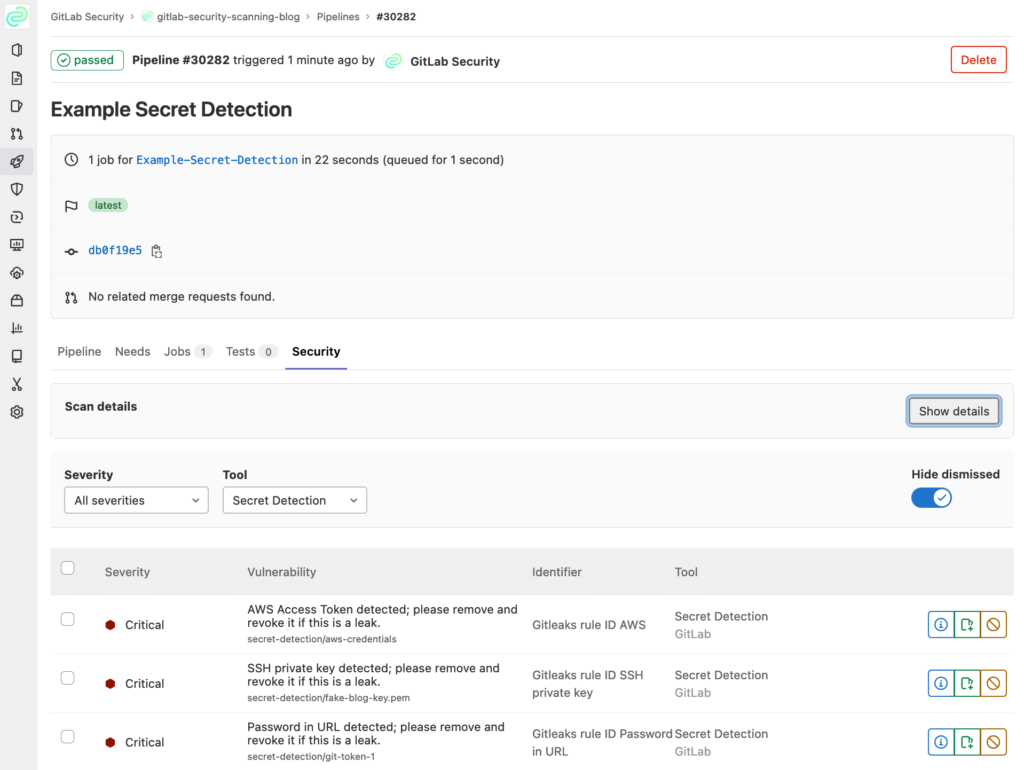 In addition to the leaked secrets, GitLab lists the secret type, severities and the path to the faulty source file.

Dependency Scanning for python is done automatically by Gemnasium
and finds security vulnerabilities in your software dependencies.

Enable Dependency Scanning for a GitLab project by creating the following .gitlab-ci.yml file inside the root directory of the project:

and pushing the changes GitLab starts the dependency scanning pipeline. Subsequently GitLab recognizes python as the used programming language and executes appropriate scans. Finally, the pipeline reports any findings to its security tab. 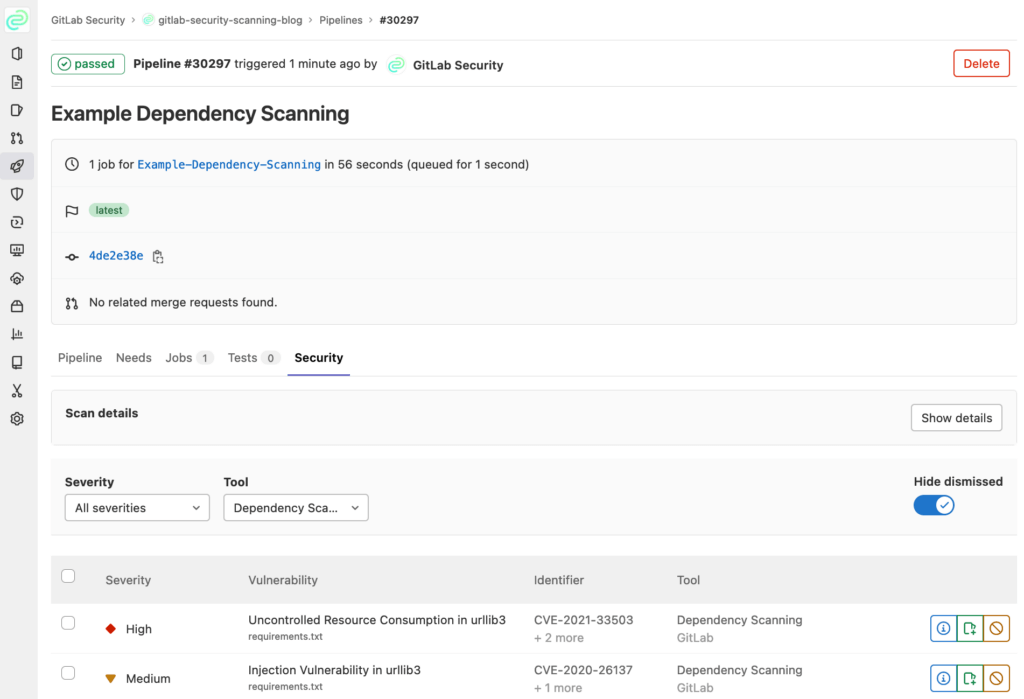 Selecting Dependency Scanning in the Tool drop down menu shows vulnerabilities affecting the dependencies of that project. Looking into the details of one finding there are a lot of information presented to help dealing with that vulnerability. 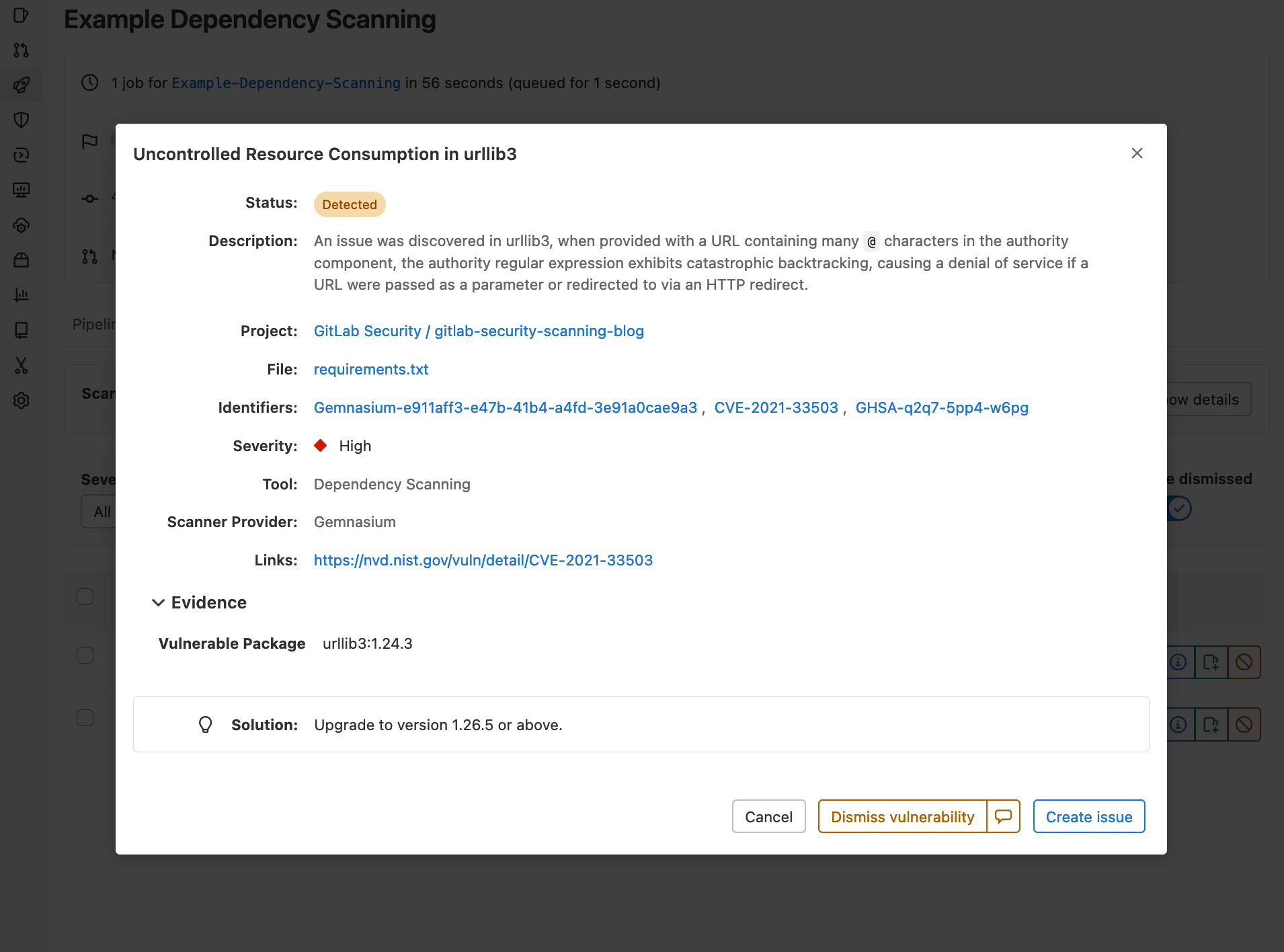 In GitLab the integration of software security scanning at different stages of the software development lifecycle can be handled easily. Simply include the appropriate security templates and you are done. GitLab does the scanning automatically and reports its findings. Furthermore all security findings can be managed by GitLab Issues. In this way both version control and security scanning is hosted by one system: GitLab.

Of course you can run multiple security scans in one pipeline:

As a result of the last step all security findings of all different types of scans can be found at the appropriate pipeline security tab.

As soon as you merge your changes into the default branch both the Security Dashboard and the Vulnerability Report of the GitLab project display all findings: 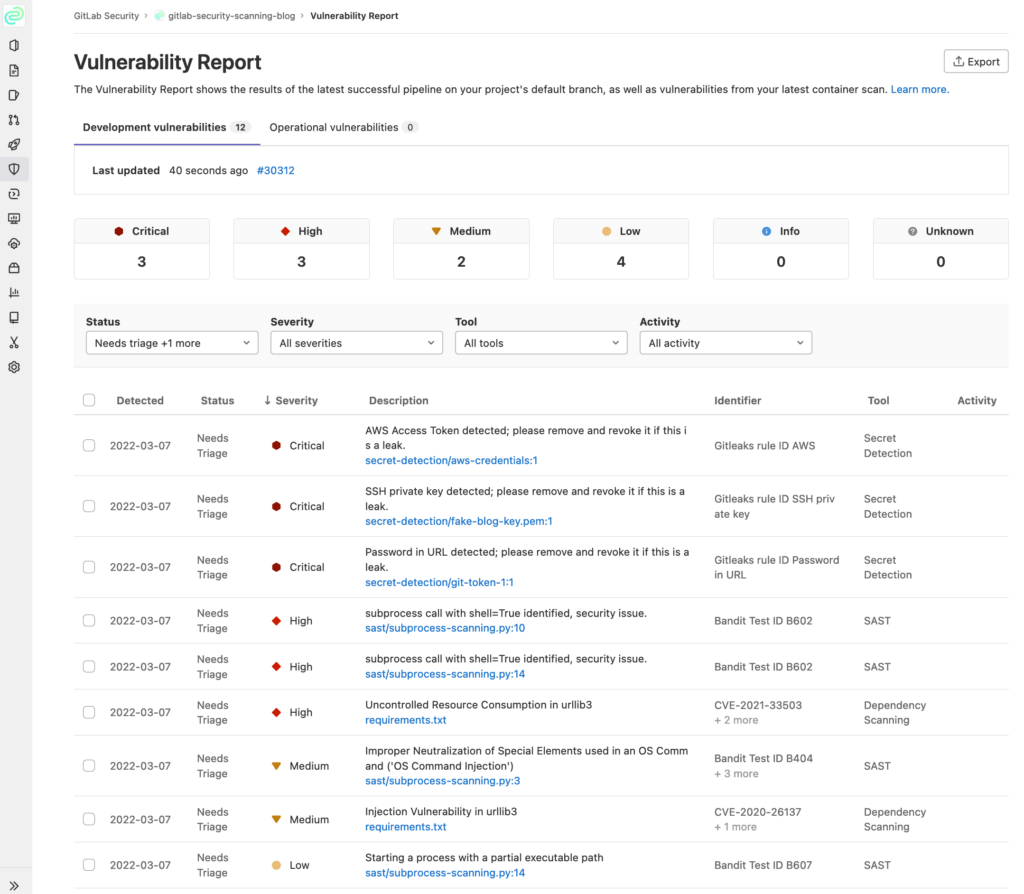 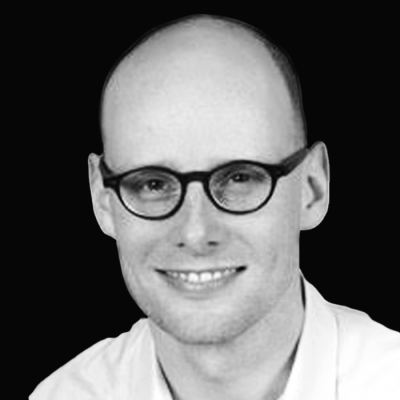 Sven Hertzberg is creating and operating distributed software systems and infrastructures. In his current role as a Cloud Engineer, he builds different highly available systems based on cloud technology for cc cloud GmbH and its customers.