What do you do when your Garbage Collection runs all the time? Well usually you would try to introduce some magic GC parameters to fix your issue. But let me tell you: Excessive garbage production cannot be fixed by parameters!
You use the parameters to tune an “ok” GC to become a “good” GC. In complex applications it is very easy to lose control over your garbage. I have seen logs where gigabytes of garbage is produced in a second. Visualized it looks like this: 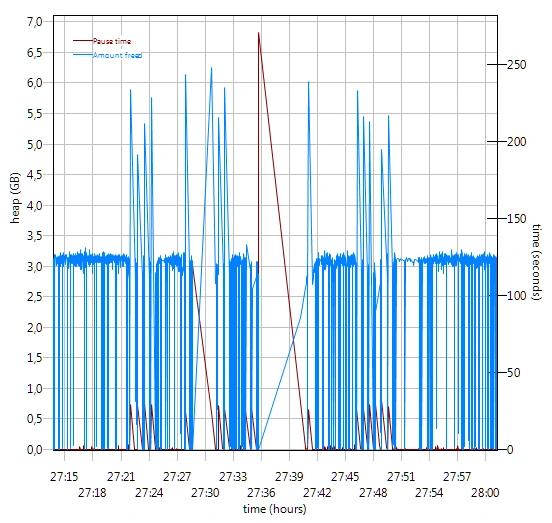 But usually it happens only in production, or, if you are lucky, maybe even in load testing, but the main problem remains: How can you figure out what kind garbage is produced? Garbage leaves no trace.

There are a few possible ways to do that:

I did not like any of those solutions, so I decided to create my own tool. Maybe somebody else has done this already, but in that case I was unable to find it.

Allocation Tracker is a performance and production optimized object creation counter. All it does is to add a counter to each call of a class matching a given prefix. It is very fast on startup, where it does load time byte code manipulation. And it is very fast on object creation, where it only adds a counter per class name. It is also designed to consume very little memory.
After startup it does nothing until turned on via JMX. Eventually you want to look at what has been recorded. That functionality is also exposed via JMX.

At codecentric we use the Vaadin Framework a lot. We also contribute back features and optimizations. When starting our application with -javaagent:/tmp/allocation-tracker-agent.jar=com.vaadin all com.vaadin classes will get instrumented.
After letting the tracker work for about a minute while working with the application, we can generate a report of the most frequently created instances:

Do not get confused by the slashes, that is bytecode speak. As a developer you usually use dots instead.
So Vaadin produces a lot of EncodeResults. No surprise for me. I have contributed a few patches already on this, because the encoding showed up as a CPU hotspot in profiling. Version 7.1.15 used here for profiling does not have them merged yet.
What was a surprise for me, however, is the sheer amount of Iterables created.
The code doing that can be seen in AbstractClientConnector#L582.

Whenever a component is attached, detached or marked as dirty, it will propagate the event to its children.
To iterate over its children, the two classes mentioned above are created in line 331.
It turns out, this is not needed in most cases and can be easily changed to much more efficient code, as I have done in commit a3578d3ac293442b64cbc5f5feb4cb9106799fdb.
Creating Iterables does not really seem to be the correct solution here, but because getAllChildrenIterable() is a public API it needs to be fulfilled.

After applying the change, a recoding of approximately the same actions results in this report:

The inner classes (with the change now also anonymous) now appear quite at the end:

So without any noticeable impact the allocation tracker helped us find excessive object creation and we were able to craft and apply a fix.

Not everything is perfect. Because of the high performance design, the agent does have a few limitations:

If you want to reduce your object allocation, most likely motivated from frequent or long GCs, the allocation tracker will be a easy to use and safe tool for you. It will be maintained by codecentric and we will merge any performance improving pull requests. Feature wise it will stay mostly as it is right now, solving the limitations it has would affect its performance to a large extend and defeat its primary purpose.
All my plans for it are documented in Github issues .
If you found any issues, fixed problems or improved your code using the allocation tracker, please let us know or create a Pull Request!