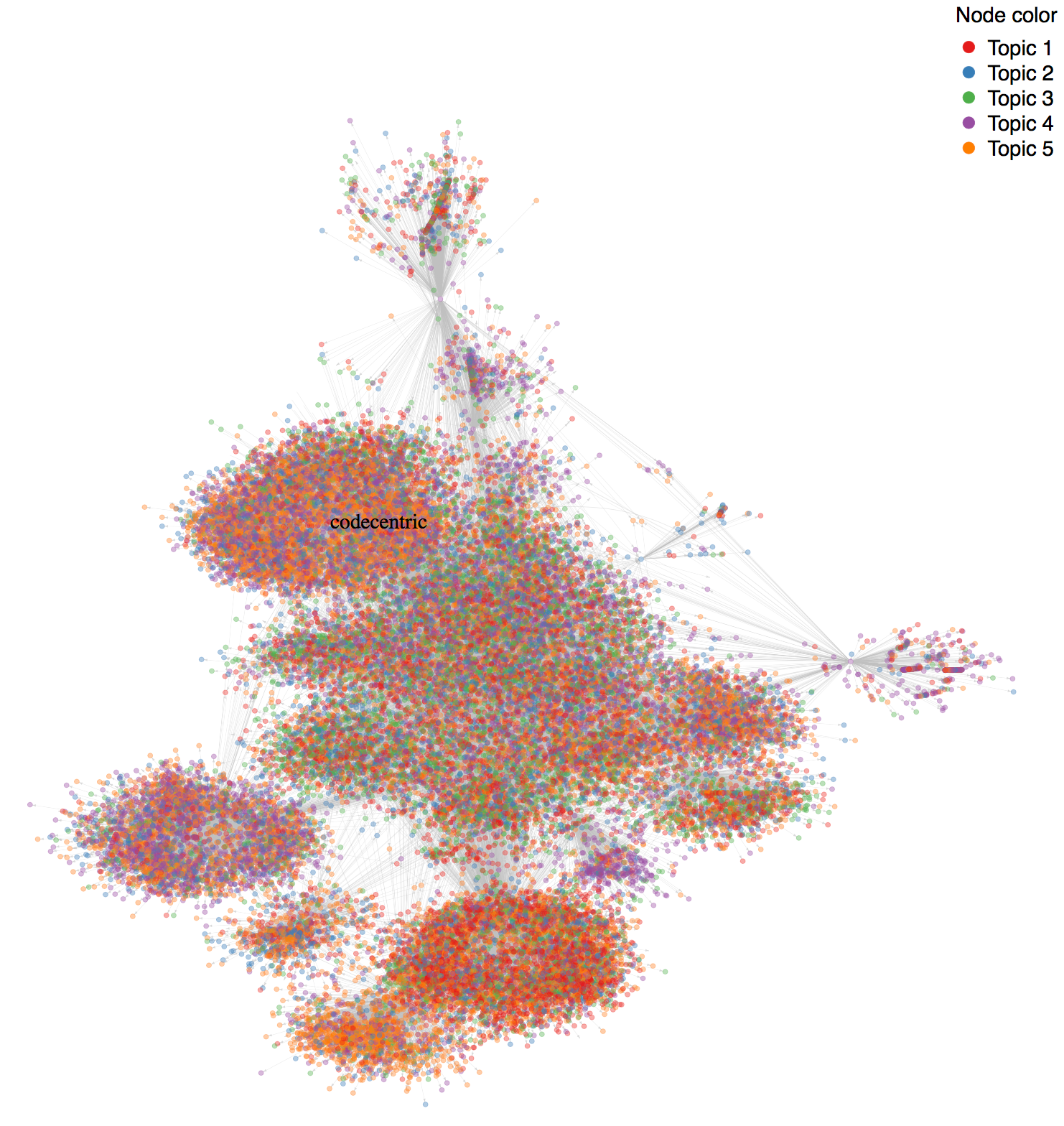 Recently, Matthias Radtke has written a very nice blog post on Topic Modeling of the codecentric Blog Articles, where he is giving a comprehensive introduction to Topic Modeling. In this article I am showing a real-world example of how we can use Data Science to gain insights from text data and social network analysis.

Knowing the interests and social network positions of our followers allows us to identify key users who are likely to retweet posts that fall within their range of interests and who will reach a wide audience.

Via the Twitter REST API anybody can access Tweets, Timelines, Friends and Followers of users or hash-tags. One drawback of the REST API is its rate limit of 15 requests per application per rate limit window (15 minutes). An alternative would be to use Twitters’s Streaming API, if you wanted to continuously stream data of specific users, topics or hash-tags. Here though, I want to look at a snapshot of codecentric’s Twitter followers to show some of the possibilities that analyzing this information holds.

We now have the following information about these friends and followers:

This data can tell us a lot about who is interested in codecentric and what we do. We can e.g. start with a simple exploratory data analysis and look at what languages the accounts are set to – no need for fancy models (just yet)!

As we can see, the vast majority of friends and followers have English and German account settings. The insight derived from this is that tweeting in both, German and English will find an audience among our followers (even though English would probably be more inclusive, assuming that most, if not all, German followers will also be able to understand English tweets).

Who are codecentric’s most influential followers and what are they interested in?

We can also try to identify our most influential followers. These would be followers with a big network (i.e. who have many followers) and who also tweet/re-tweet a lot. If we capture these followers’ interests with one of our tweets, they are a) more likely to re-tweet and b) will reach a bigger audience by doing so!

Correlation between follower count and the average number of tweets per day of codecentric’s Twitter followers.

The plot above shows the correlation between the number of followers codecentric’s followers have and how often they tweet.

Now that we know who our most influential followers are, we can analyze their short descriptions about themselves to find out what they are interested in. By proxy, this will give us an idea about which kind of tweets are most likely to capture their interest. Of course, this is not to say that these are the only people who (should) matter and that tweets should be tailored towards these interests only! Covering a wide range of topics makes for an interesting and authentic profile but since “knowledge is power”, it can be extremely valuable to know which tweets/posts are likely to increase visibility!

In order to extract information from the descriptions of the most influential followers (defined as the top 100 followers based on a score of follower count * average tweets per day), I am making use of text analysis and natural language processing tools.

To prepare the data, I am splitting the user descriptions into words, convert each word to its word stem and remove stop words.

We can now identify the most common words in these descriptions.

Not surprisingly, software development, agile and business are among the most common words. But also IoT, data and science occur frequently in our influential followers’ descriptions!

Here, we can also use bigram analysis to identify negated meanings, i.e. words preceded by “not”, “no”, etc. In sentiment analysis, the meanings of negated words can then be reversed.

Social networks describe interactions between people, e.g. Twitter friends and followers. The analysis of such networks makes use of graph theory.

Here, we can show codecentric’s Twitter followers and friends as a directed network: each node represents a user and edge arrows indicate who a user follows.

Because of Twitter’s API rate limit, I have only mined the friends lists of 106 of codecentric’s friends. Still, this leaves us with a network of 39929 second degree connections!

With graph theory we can calculate a number of metrics that allow us to identify key players in the network:

Below, I am showing the network graph with node size representing betweenness centrality. Nodes with high betweenness centrality are on the path between many other nodes, which makes them key connections or bridges between different groups of nodes. These users are very important because they are likely to pass on information to a wide reach of other users. Node positions are calculated with the Fruchterman-Reingold layout algorithm.

We can now use the follower descriptions again to identify groups of users with similar interests. For a detailed introduction to topic modeling, see Matthias Radtke’s “Topic Modeling of the codecentric Blog Articles”“.

Here, I am using Latent Dirichlet Allocation with the VEM algorithm to group codecentric’s first and second degree connections into five topics.

The wordcloud below visualizes the most characteristic words for each topic.

Now, we want to know which topic each user in our network belongs to. This, we can find out with the so called gamma score. Each user is assigned the topic with highest respective gamma score.

This network shows the different interest groups of codecentric’s Twitter friends based on what topics they and their friends were assigned to (one user e.g. seems to be follow many users assigned to topic 1, which is about software development).

Even though this network is far from representative, because it only shows a subgroup of second degree friends, we can already see the potential that this information contains! We now have a very good idea about the interests of our friends from a) their Twitter descriptions and b) from the descriptions of the users that they in turn follow. We could now, for example, generate a similar network with first and second degree followers. It would give us a good idea about the interests of users who are not (yet) followers. This information could be used to target specific interest groups by expanding or focusing more on topics where we see a potential for reaching many users via existing followers.

We could even imagine combining this approach with machine learning techniques to predict follower interests and sharing-potential.

All analyses have been done with R version 3.4.0.

Code is available via Github.