A service worker is essentially a script running in a separate thread of the browser. It can be used to offload processing to a second thread. Typical examples are: caching assets on the client side of a web application, and also intercepting outgoing HTTP requests made by an application to serve cached responses. The browser UI thread can receive and post information to the local service worker and offload some heavy duty processing without making the UI wait for it. So a service worker can make a web application more responsive and robust in various situations. It also can reduce the load for the web servers and spare network bandwidth.

Lifecycle of a worker 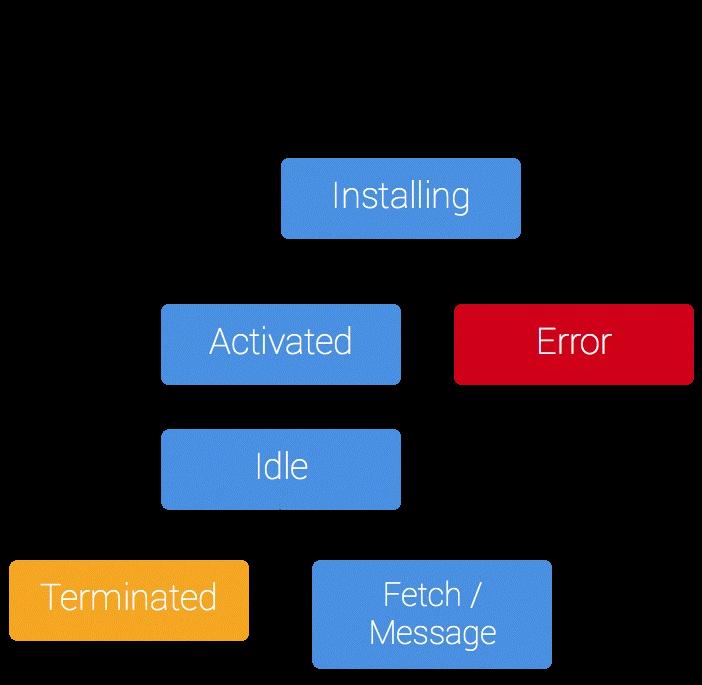 The scope of a service worker is based on where the file – with the worker – is stored, so storing it in a sub folder means it can only access those files. It is important to understand that a browser on a certain page can only use a service worker belonging to the current page, also when loaded in an iframe. A service worker can use external scripts which it knows with an import like the example below.

A service worker will be kept registered after a page refresh and browser restart. It requires a page to be served via HTTPS which is a nice built-in security feature but slows down development and that’s why an exception is made for the localhost domain. This exception in itself could be an opening for exploits, one can imagine that it is possible to insert a service worker on the localhost domain with a specific port like 8080 when people run an infected web application at least once. This service worker can lie dormant after that and activate when a new web application serves from that same port. This whole chain does not present a big security risk but helps to understand how a service worker could act in an unexpected and malicious way.

Another bit of unexpected behaviour of a service worker is that when a service worker script changes and the new version is fetched from the server, the new version won’t load immediately. The update will be done if you trigger it manually or when all browser tabs are closed. In Firefox you can go to ‘about:serviceworkers’. You will see the service worker registered below and you can manually force an update or unregister. This will not force an activation for this you need to do a hard refresh at least.

Currently #218, the old service worker, is still running. We can now manually trigger the update to have effect when you click on ‘skipWaiting’.

As developer sometimes you probably want your updated service worker to be effective faster than a manual hard refresh or click in developer tab. To automate that in the code, the ‘Immediate Claim’ recipe is useful. This recipe is described in the Service Worker Cookbook which is a very useful site with use case examples for service workers. An implementation of the immediate claim will trigger the ‘skipWaiting’ action when doing an install and the install is triggered by an update. A simple service worker example of the immediate claim is provided below.

The clients.claim() line really matters on the first load of the page if you want to run the service worker before certain calls. In the below example we listen to a fetch of other.jpg.

Synergy of the worker

Service workers themselves are safe, but their persistence after page visits does pose a danger when malicious code can be injected. In this case the user could not be on the site but the service worker is actively doing unwanted behaviour like crypto-mining. I don’t want to end with this negative statement so I want to tell more about how cool service workers really are, especially with other technology like WebRTC. WebRTC is already changing the way content is delivered on the internet currently, making more use of peer-to-peer connections – although one can argue that service workers should not be used for anything that creates longer-running connections. The suggestion for allowing service workers to make use of WebRTC is some years old (https://github.com/w3c/webrtc-pc/issues/230 ), but still not part of browser functionality. If service workers were able to use WebRTC directly, they could intercept normal HTTP calls and handle them via a WebRTC data channel instead, and content will still be present even when the browser refreshes. This functionality would definitely make the browser experience more like a native application!

Understanding security vulnerabilities I’ve noticed developers worry about vulnerabilities in applications they develop. I also think most of them try to do their best to prevent any problems. And I must confess I’ve lost a couple of nights of sleep ...

For a couple of months now I have been working on an application that uses Apache Camel. I am not sure if it’s a good choice for this application because it does not deal with many sources of information. But I am convinced that Apache Camel can provide...

How and when to use JSON Web Tokens for your services

There are multiple ways to allow a service to be used securely. JSON web tokens is one of them, although there are limitations to the security that JSON web tokens provide. JSON Web tokens(JWT) is a standard for representing claims securely between two...

So in a average IT project something like acceptance test comes up sooner or later. Which is a good thing because we want to be sure about the functionality that is provided by the software actually works. So we make acceptance tests and show the results...